Co-zyme is a unique blend of enzymes like Amylase, Cellulase, Protease,Pectinase, Cellulase, Xylanase, Lipase, Beta Glucanase, Alpha glucosidase and Mannanase. Cereals such as wheat, maize etc contain long, complex carbohydrate also known as non-starch polysaccharides (NSPs), for which animals like pigs and poultry do not produce the necessary digestive enzymes to hydrolyze. NSPs in cereals like wheat are called arabinoxylans, and those in barley are beta-glucans, such are recognised as anti-nutritional in behaviour. They increase the viscosity of food and put a pressure on the animal's own enzymes (digestive system). Addition of Co-Zyme which is a cocktail NSP enzyme, allows the breakdown of these anti-nutritional factors and enables fasterand more complete digestion ofthe feed, leading to improved nutritive value.
The poultry feed is a complex mixture of cellulose, plant ﬁber, grains, fatty matter, oil seeds and oil cakes. Poultry does not produce suitable enzymes required forthe digestion ofthese macromolecules. 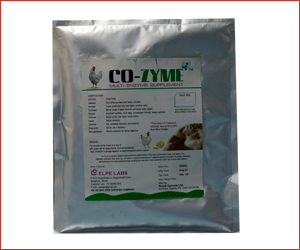 Primary function of all the enzymes in Co-Zyme are:

The enzyme can be dosed at a rate of 100 to 2509 / Ton of feed.(Variation in dosage depends on feed formulation and its nature) 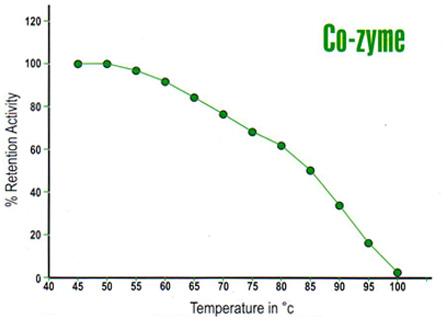 Established in the year 1986, 'Elpe Labs, Benguluru', are reckoned as the most revered manufacturers, exporters and suppliers of an impeccable conglomerate of Feed Supplements.